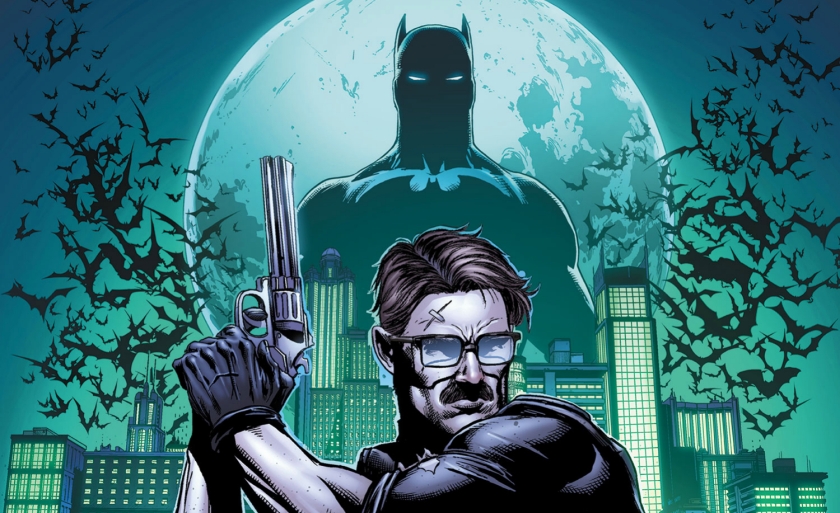 The status quo for Batman has changed.   A close but unexpected ally has taken to the cowl while Bruce takes a stab at “normal living.” You would think heroes like Nightwing or Red Robin (or even Batgirl) would keep the Batman name alive, but it’s none other than James “Jim” W. Gordon, Sr. who has taken up the mantle.

Immediately, I was skeptical this would work and figured this was another one of DC’s many ways to “try something new” or a cheap sales “switch things up” tactic.  But when I realized that Scott Snyder and Greg Capullo were the ones in charge of writing and inking, I decided to give it a chance, The Snyder and Capullo team have been killing it on Batman for years, making it one of the cape crusader’s most successful runs–not only sales but in story quality as well.  You can credit the Snyder/Capullo team with creating the Court of Owls, introducing new foes, making old enemies (like The Joker and Riddler) new, smarter, and scarier.  That resume put me at ease and more willing to see what the o’l commish could do.

One of the first things I’m glad they brought up is Jim’s hesitance at taking up the cowl.   As Gordon so bluntly says, and I quote, “This is the dumbest idea in the history of Gotham City.”  But that’s what makes this idea work.  Jim isn’t Bruce, and its clear to see.  He doesn’t have the years of expert training or near Olympian body strength that Batman typically has.  That’s not to say Jim is a pushover in the least.  He was in the Marines prior to joining Gotham City PD, and the years on the force have given him excellent street smarts.  However, it is Gordon’s faults (not his strengths) that make him an interesting Batman.

This is a Batman who is distracted. Unlike Bruce Wayne, Jim Gordon has the problems of an ordinary cop, an ordinary family man.  It is a factor we have not really seen in a Batman story before: a Batman without a plan for every single situation. Where Bruce would be cold and calculated and straight to the point, Jim is worrying if he left the stove on or if his wife will be okay without him. These differences breathe a huge breath of fresh air into a comic that has done almost everything it can do.

The greatest and most obvious change in characters is the mech-suit that Jim wears.   Yes, it looks less Robo-Cop and more a Robo-bunny, but that is okay–believe it or not.  The approach Snyder has taken with Gordon’s Batman is lighter in tone and not without humor, and it is apparent in the suit design.  Many jabs have been taken at the suit in the comic (and by many fans have in the real world), but it works.  The suit is a sort of giant utility belt for Jim, and it makes sense.   Where Bruce could act instantly, Gordon is given time to take a punch while trying to figure out the best way to get out of a situation.  The suit allows him perform the role of Batman, where his again body could not.

Snyder is writing Gordon, not Wayne.  Jim is a much better shot than he is a thrower of punches (as a seasoned police officer, of course he would be).  Given Bruce’s strict no guns rule, it’s another way to show the differences between the two Bats, to remind us what an original and creative turn the story has taken here. This Batman is packing heat in the form of a Batarang gun.  With the commissioner in the suit, Snyder is free to explore ideas unavailable to the canonical Wayne character, to create otherwise outrageous scinarios…and we should be happy he has.

Jim Gordon has been Batman now for five issues, but he’s already doing guest spots in other comic runs.   It’s been interesting to see how this Batman reacts and interacts with the rest of the bat family and heroes. While it is only a matter of time before Bruce takes the cowl back, I’m in no rush to see it happen, anymore.  I’m excited to see what kind of adventures Jim gets himself into and hope that when Bruce does take the name back, Jim isn’t simply thrown back onto the sidelines, again.

What are your thoughts on Commissioner Batman? Do you feel like this is a good run? Let us know in the comments!