You can whistle while you work all you want, but you’ll never be able to afford a ticket.  Yes, not too surprisingly, Disney is again raising the price of attending its Southern California parks.  Last February, one-day single-park prices topped out at $99 dollars each.  Along with these increases, annual passes, at all levels, suffered a bump in pricing.  Well, with the year’s end still a couple of months away, Disney is el
evating its prices yet again.  Sadly, the magical kingdom is beginning to reflect a not so magical reality: a world of dreams for the rich and gates locked to the poor.

The OC Register reported the new increases today.  Most noteworthy, the top-tier annual pass will surpass the $1000 mark next year.  Other passes will also see increases and have more “blackout days” during peak attendance days.  The explanation has been pretty consistent. “We have to look at ways to spread out our attendance throughout the year so we can accommodate demand
and avoid bursting at the seams.”  Anyone who has visited a Disney park would understand this.  For a family of four, a single-day visit could easily top $600 for parking, entrance, and food (a very conservative estimate).  And even if you can pay the price, your family will likely face 1-2 hour long lines, sold out fast passes, and unnavigable parade crowds.   All this comes along with a string of other Disney price gouges: a $300 breakfast Jungle Cruise, an $84 Halloween Party (additional price to see seasonal parade and fireworks, included with regular ticket in previous years), and upwards of $100 dollars to stand in front other guests at park shows (i.e. World of Color and Fantasmic).  More money, more money, more…you get the point.

Now, I’m not suggesting Disney doesn’t have the 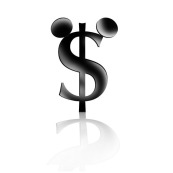 right to make a profit.  As a matter of fact,considering park attendance alone, the Disney company has profited to the tune of nearly 2.5 billion (that’s billion with a “b”) dollars.  Claiming price increases are intended to control crowds and improve the family experience is quite simply a lie.  It doesn’t work.  It hasn’t worked.  There has been zero evidence, looking at past increases, that it will ever work.  All it succeeds in doing is keeping poor families out.  And Disney, who has in recent decades been on the forefront of diversity and equality, has forgotten the last great social divide: class.  That, more than anything else, is saddening.  As the western world’s primary purveyor of culture, Disney has, dare I say, a massive responsibility to the people driving their success and profit: its customers and their kids.  Rich and poor.