2015 is gone and we’ve had time to reflect on some of the wonderful and terrible nerd events of the year.  You have to agree, there were too many nerdy, geeky, pop culture events to count.  A few of us decided to make a quick list of our favorites, both good and bad.  Please chime-in and let us know your thoughts.  Do you agree with us?  Do you have you own list?

In 2015 fiction, Paolo Bacigalupi’s novel, The Water Knife, was not to be missed.  It’s a science fiction thriller about a not-so-distant future, a future where the western United States has fallen into armed conflict, espionage, and terrorism over water rights.  It’s filled with enough well researched water politics and history to make this native southern Californian more than a little uncomfortable.

In 2015 non-fiction, The Year of Lear by James Shapiro was sure to satisfy even the most informed Shakespeare nerd.  Shapiro constructs a vivid depiction of the Jacobean world of 1606 and all the social and political context that shaped some of the bard’s greatest works.

For 2015 gaming, I thought nothing could beat Bethesda’s Fallout 4.  With a rich post-apocalyptic world to explore, innovative crafting system, and one of the most creative tools for building, it was an easy pick for game of the year.  Then, I finally got around to playing The Witcher 3.  TW3 was hands down, the BEST play of 2015.  Detailed and memorable characters.  Exciting and complex stories around every corner.  An expansive world for players to explore well passed the 100-hour mark.  It had everything.

The small screen has, for several years now, proven it has the ability to produce high-quality original content, and 2015 was a marquee year. Two shows topped my list: FX’s Fargo and USA’s Mr. Robot.  If you somehow managed to miss either of these shows, go watch them now…NOW.  The highest grossing films of 2015 come nowhere near the quality of writing and acting demonstrated by these shows–better even than, dare I say, GOT or TWD.

For anyone that has read my reviews or listened to the TT3 podcast, this disappointment will come as no surprise.  Jurassic World was a terrible film and the biggest disappointment of 2015.  It was the Episode I of the Jurassic universe.  With a continuous stream of product placements, an entirely derivative plot, and uninspired monster design, Jurassic World was pure commercial garbage.  It is a film that proves the public will buy anything, as long as it has the right marketing strategy.

DISHONORABLE MENTION:  The Walking Dead in 2015 had great performances, writing, and direction.  Fear the Walking Dead was cheaply produced,  lazily directed, and boasts some of worst performances of the year.  This was a show that had nothing but TWD coattails to carry it, and inexplicably, it was carried all the way to some undeserved high ratings.  With all the great writing done in television last year, FTWD stood out for its low production values and ridiculously improbable characterizations.  My favorite bad moments?  The ten apocalyptic rioters chanting, “hell no, we won’t go!” and the school counselor that returns a knife to her troubled student…while he’s still on campus.  You thought the dead rising from the grave was unbelievable?

This year’s top three nerdgasms that I can recall at the moment are:

Game Of Thrones had another awesome season.   We “lost” Jon Snow, and the geek world held its breath…then commenced the rounds of conversation with fan theories…can’t wait for its return in 2016. 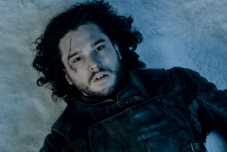 For all the space nerds, the Supermoon in September was witnessed for the first time in 30 years! Everyone tried to capture their own crappy picture and post it to their socials…some better than others, but we all wanted to be a part of this astronomical (literally and figuratively) event.

I mean, really, I could say Star Wars for all three.  It brought all the cool merch our way, and then the Disney announcements, and BATTLEFRONT!…but let’s break it up a bit… haha!

The Witcher 3: Wild Hunt: Nowhere near as perfect as some fans and critics would have you believe, Wild Hunt nonetheless set a new high water mark for open world fantasy RPG’s, and proved that there was still a market for games about old white guys with dark pasts who exist to get laid and save the world from monsters. In pretty much that order.

FALLOUT 4: A dark, funny and deeply disturbing look at post apocalyptic Boston, FO4 deemphasized some of the RPG elements I enjoy most, and over emphasized survival, building, and busy work, but I loved every minute of it.

Star Wars Rebels: Season 2: Deep backstory, engaging dialog, and well written characters flesh out a vision of the Star Wars universe between the late bombardment of Endor and the rise of the first order. Rebels is all the more magical when you realize it was designed for seven year old kids but can effortlessly hold the interest and attention of a grown man with children twice that age.

Sword Coast Legends: With a legacy built on titles like Baldur’s Gate, Planescape: Torment and the Neverwinter Nights franchise, you’d think SCL might deliver a truly modern take at collaborative PC gaming in the world of Dungeons and Dragons. And you’d be wrong, again, suckers.

Honorable Mention: The GOTY version of Dragon Age: Inquisition dropped in October, and is probably the best value in RPG gaming right now. I’d live in the dark fantasy world of Thedas if I could, but the wifi reception is dodgy near rifts.

Hateful Eight was the best movie of 2015.

That’s all I got…

Let TT3 know what landed on your favorite (and worst list) during 2015.