You’d be hard pressed to find a more loved artist than the sic-fi, fantasy, and gothic horror writer/director, Guillermo Del Toro.  His films and projects span the entire spectrum of the nerd universe, and his ubiquitous presence at industry conventions has made him a fan favorite.  In my many years attending SDCC, I’ve always made it a point to hear him speak whenever possible.  His humor, his kindness, his immeasurable support of young artists (while on stage, he once gave out his personal email to an unknown writer, saying he’d look at his screenplay…honest), and his lusciously grotesque and romantic vision have made him a uniquely lovable genius.  Tracing the development of Del Toro’s aesthetic is not an easy undertaking, considering the diversity of his creative work, but a recent traveling exhibit, At Home with Monsters, is giving his fans a chance to do just that.  The Los Angels County Museum of Art recently finished hosting the personal collection of Del Toro.  Beginning on March 5, the Minneapolis Institute of Art will be hosting the immense assortment of artifacts and memorabilia.  Yes, included are objects from Del Toro’s films, but there are also items chosen because of their personal connection to the man himself.  These are the objects Guillermo set on his shelves, hung on his walls, and coveted for his love of them.  Monsters’ exhibit is not simply a life’s retrospect or a filmography, but rather, it is a look into the psyche of the beautifully bleak master.

Obviously, it would not be a Guillermo Del Toro exhibit without a nod to the filmmaker’s most prominent body of work.  And, there is no shortage of filmset props and costumes: the “device” from 1993’s Cronos, gowns worn in 2016’s Crimson Peak, a sculpture of the “pale man” from Del Toro’s masterpiece, Pan’s Labyrinth.  Among the collection, you can follow the development of his passion project, the Hellboy series, through comic book prints, inked sketches, and items used by Ron Perlman during the production.  Because the exhibit is not chronological, but rather thematic, you view Del Toro’s world through a microcosm of conception and obsession.

Art, sketches, and notebooks that inspired Del Toro over the years play prominent role as you wind your way through the maze of displays.  A pair of child’s slippers from the eighteenth century.  Life-sized models of iconic figures like H.P. Lovecraft, Boris Karloff, and Ray Harryhausen. In the items chosen by Del Toro, you can see both the formation of his aesthetic and his love for the contradictory juxtaposition of horror and beauty.  To my surprise (although maybe it shouldn’t have been), I found a number of selections from Zdzisław Beksiński hanging on the walls.  The polish painter, with his precise renderings of surreal apocalyptic architecture and darkly romantic themes, seems a perfect match for his inclusion among Guillermo’s works. 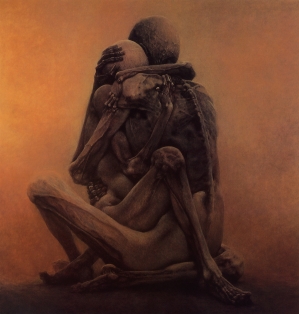 If you were unable to make the LACMA junket, there are still a few more stops for the Monsters tour.  It is the rare pop culture exhibit that goes beyond the often too surface celebration of fandom and moves into a deep examination of the psyche behind the art.  But, don’t wait too long to see it.  As Guillermo has pointed out in a recent interview, he eventually wants his stuff back.