This past Monday, September 19, 2016, I watched what is likely to be the last time I see Black Sabbath perform live.  The Hollywood Bowl show in Los Angeles was part of Sabbath’s current world tour, lovingly dubbed “The End.”  I couldn’t be faulted for being skeptical.  After all, seventeen years prior I stood in a field in San Bernardino, CA, the acrid scent of trash fires in my nostrils, and watched Bill Ward, the band’s original drummer, hang a sign from his hi-hat stand that read, “THIS IS THE END.”  That farewell tour was part of the popular festival known as Ozzfest…in the year 1999!  So much for farewells.  Still, as I sang along one last time to War Pigs, it really did feel like rock’s first heavy metal band was in its final days. 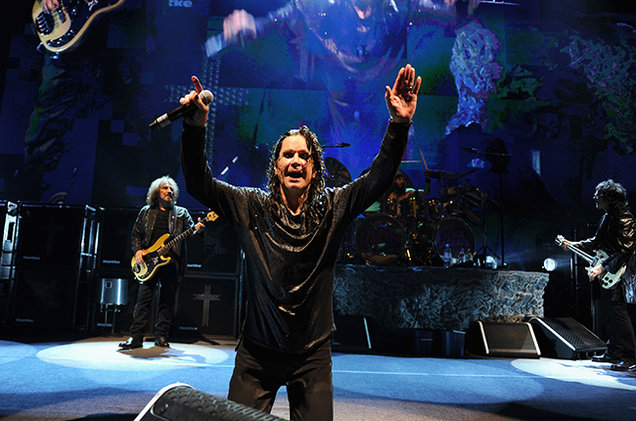 Honestly, the early connection I had with Sabbath came from my early love of two things: horror stories and science fiction.  One of the earliest tracks from the band (and one of the first I’d heard) is Sabbath’s lyrical namesake, Black Sabbath.  It is the musical equivalent of an Edgar Allan Poe tale read aloud by candlelight at 3 am.  The atmospheric soundtrack of the introduction–rain, thunder, church bells–recalls the Vincent Price films of the same era but darker and more threatening.  The song, Black Sabbath, doesn’t sound safe.  It feels like you shouldn’t be listening to it.  It is one of the few songs penned by singer, Ozzy Osbourne.  Geezer Butler, the band’s bassist, is the primary lyricist for the group but only provided the conceptual inspiration for its writing.  Butler had relayed a nightmarish vision to Ozzy, one that had been prompted by his reading of a 17th century book on witchcraft.  “I just woke up suddenly and saw this black shape at the bottom of m[y] bed,” he described during a 2010 interview, “and it just vanished into thin air as I was staring at it.”  The experience is retold by Ozzy in the opening lines of the song.  It is creepy as hell, and the horror movie nerd in me couldn’t get enough.

As the hippie generation of the 1960s faded, Sabbath harnessed the gloomier projection of the future that other genres were already exploring: horror films like Romero’s Night of the Living Dead or Polanski’s Rosemary’s Baby were not only terrifying, they were social polemics.  Black Sabbath was part of that significant cultural shift.  Like their contemporaries, they weren’t just scary, they were smart…and scary.

For nerd culture, there are few songs that have captured the notoriety of Sabbath’s Iron Man, but for all the wrong reasons.  The song was featured in the 2008 Jon Favreau film, and subsequently, many have associated the 1970 produced song with the comic book hero of the same name.  Actually, Geezer Butler, who wrote the song, has been fielding questions about Iron Man’s lyrical origins for decades.  Iron Man, the American comic book, was created in 1963 by Stan Lee and is about a man clad in a mechanical suit of metal–and that is where the song/comic similarities begin and end.  Butler insists he had never read the American comic before writing the tune, and it is clear, with minimal examination, the two tales are not related.

Butler’s Iron Man, with no disrespect to Stan Lee’s character, is a much more complex bit of storytelling.  It is a time travel tale in the vein of Robert Heinlein’s All You Zombies.  The protagonist at the center of Iron Man goes into the future with the help of government sponsored technology, and in doing so, witnesses the end of the world.  On his journey back to the present, his body is transformed “in the great magnetic field,” and he is unable to warn his countrymen of the danger they face.  They exile him because of his mutation and because of their own ignorance.  Iron Man becomes resentful and begins “planning his vengeance.”  The time traveler who warns against the end of humanity becomes its cause–the circle is closed–mind is blown.  Iron Man is an effective example of apocalyptic science fiction, and it accomplishes much in four short verses and two even shorter refrains.

The haunting Black Sabbath and the apocalyptic future Black Sabbath appealed to the geeky kid I was many years ago.  I spent countless hours watching zombie movies and Terminator sequels, so maybe Sabbath was just an extension of the universe I already loved, and still do.  Without Sabbath, we were unlikely to get Iron Maiden, Slipknot, or even Rob Zombie (not to mention The Misfits, The Cramps, or Nekromantix), to the chagrin of parents everywhere.  The wonderful nerd world of horror and sci-fi found its rock-n-roll home in Sabbath, as did the ten-year-old in me.  If this is truly “The End,” let’s leave the fresh grave open, a rotting heavy metal corpse for many more generations to enjoy.