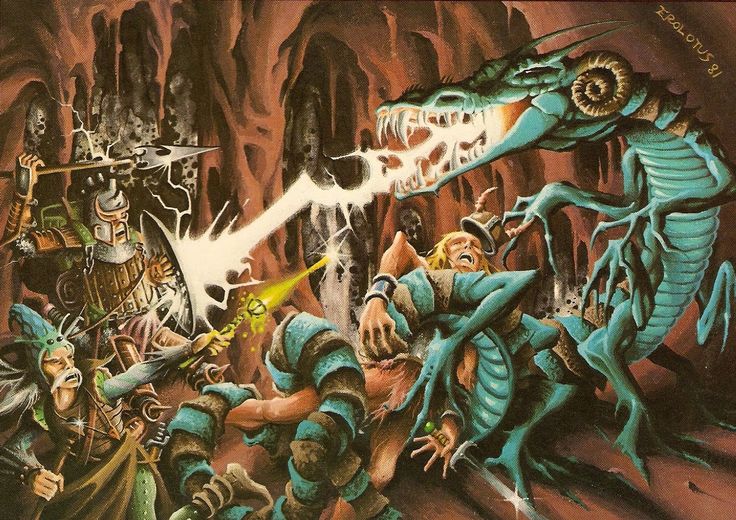 Forget point-buy and standard array. Forget roll four and drop the lowest. Forget “arrange the stats as you desire.”

Forget choosing to be a demi-human this or that, ok? You will roll a random background occupation for each of your 3-5 characters from a table on page 22. If you wind up playing a Dwarf, Elf or Halfling, you’ll have the result of a d100 roll, five minutes into character generation, to thank for it.

Forget choosing a class for your Elf if you do score one as a background. In a nod to original D&D — an Elf is both a race and a class, as is Dwarf and Halfling.

And did he just say 3-5 characters? How the hell am I supposed to keep track of all that?

If your entry point into the D&D hobby was sometime around the turn of the century, you won’t remember original D&D and you won’t get what all the fuss is about. In fact, you might even be asking yourself, “why do we need OD&D inspired table-top roleplaying games anyway?”

The short answer is: you don’t.

Fifth Edition Dungeons & Dragons is a damn good game. It might even be one of the best versions of D&D ever. There is certainly no shortage of published adventure content available for players and DM’s to enjoy together. You can play it around the kitchen table with your friends and fam. You can play it online using roll20 or Fantasy Grounds. If you live in or near a hobby game store, you can probably get in on an Adventurer’s League game; the official open-to-almost-everyone Dungeons & Dragons “game” night.

Have you ever played in a D&D campaign with the rules dude? You know, the guy who likes to memorize the contents of the player’s handbook competitively and knows the dungeon masters guide better than you do too? Do you know why a rules dude is like that? It’s because modern RPG’s don’t contain enough random number tables as part of their core ruleset. Everything is codified and scripted according to a few simple rules and all action — at the table anyway — flows from these guiding principals according to their matrix. This is both a blessing and a curse. Had you given the rules dude something shiny to play with, you might have put his energy to better use.

The rules dude isn’t necessarily trying to show everyone else up, though it’s easy to assume he is. The rules dude sees the game as “simple” and demonstrates his mastery to illustrate what is possible. He wants everyone at the table to be as diabolically clever as he is. But roleplay guy is dreaming about his backstory right now, while the artist offers to doodle everyone’s parents, and….

You get the idea.

DCC eliminates all of that nonsense upfront during character creation. If you follow their advice, each player will be rolling dice the moment they sit down to play. They will roll their six ability scores — strength, agility, stamina, personality, intelligence, and luck — in order, using 3d6 and marking down their scores on a character sheet. They will roll three more times; a d30 for the type of luck they will have or not have, a d24 for a single piece of adventurer’s gear, and a d100 for their occupation/ background, which also determines their starting weapon.

Each player will make 3-5 of these characters, assign them an alignment (lawful, neutral or chaotic) and give them a name. I strongly suggest you don’t let them spend a lot of time on their names, either, because that might lead to unhealthy attachments.

With a little practice and a well-thumbed copy of the rulebook, a player should have five characters, printed on 3×5 index cards in about 20 minutes. I like to encourage my players to do this at the table, in a group. I print out extra copies of the luck, occupation and equipment tables and let them go to town. I particularly enjoy their anguished tears once they realize they don’t have a full allowance of “normal” adventuring gear between all five of their characters.

Stay tuned for Part 2: Welcome to the Funnel